I was lucky to grow up in a city just two blocks away from a UNESCO Biosphere Reserve – the Niagara Escarpment (photo above). As a kid I played in the forests of the Escarpment, and years later as an environmental lawyer I was thrilled to help protect a chunk of it from being logged and mined.

I love trees. But beyond my preferences, trees are very important in a city. They provide habitat for birds and animals. They encourage and support people to be outdoors, which is good for physical and mental health – reducing cortisol, the stress hormone. Being outdoors is also good for society as we greet neighbours and strangers (and avoid social media).

Shade is a good thing. We seek out shade and cling it; people walk down the shady side of a street. Shade is especially important as climate change gets worse and we get more hot days and heat domes. Trees are sometimes called the “poor person’s air conditioning” and they significantly reduce surface temperatures in streets and parks. 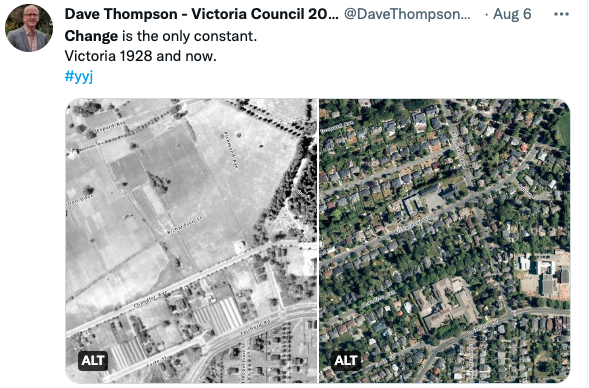 Can urban trees make a difference to the level of GHG gasses that cause climate change? They absorb CO2 – about 22kg / year for a mature tree. For comparison, the average motor vehicle emits 4,600kg CO2 / year – more in two days than a mature tree absorbs in a year.

Trees reduce urban air pollution, depending on the species. Victoria’s air quality index is pretty good, averaging less than 2.5, even in summer (1-3 is considered good, with the scale going up to 10 and higher). However, air pollution is worse in some areas, like downtown.

Victoria’s greenery has certainly grown over the decades since 1928 (see above), and City data suggests it continues to do so.

However, the City needs more trees, particularly in downtown and core areas where there is a concentration of population, and far fewer trees (see below). 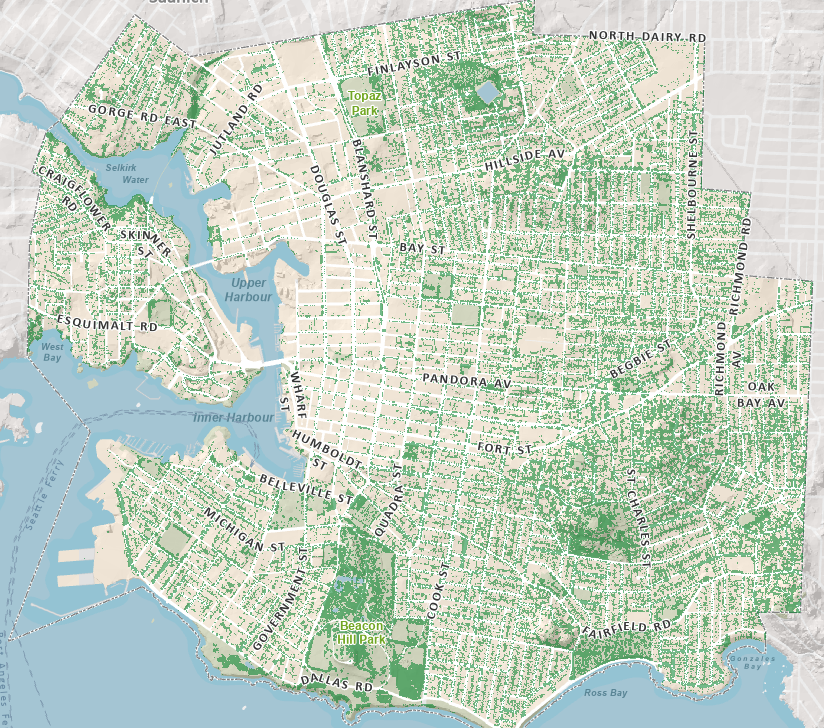 On Victoria City Council, I will be pressing the City to examine more options for increasing tree cover, especially in areas currently underserved. There are many examples worldwide of tree canopies over built-up streets with little to no building setbacks. As one example, I note the recent plantings accompanying Government Street bike and roll lanes, and wonder if we can do something similar on Fort and other streets.

If you have more ideas for increasing Victoria’s tree cover, I’m all ears – please let me know. And thanks!