The Missing Middle Housing Initiative (MMHI) has attracted a lot of media attention in recent weeks, as Council held a few additional hearing nights. Victoria residents in attendance were at times yelled at by other people. The Mayor tried unsuccessfully to enforce long-standing rules against cheering and shouting in the Chamber (I didn’t notice Council support for those efforts). While these additional hearings certainly stoked community division, I doubt that Council heard anything new at them.

In the end, a Council majority adopted some more amendments at the very last minute, which a majority then turned around and used as a reason to once again punt the MMHI decision, as I suspected they might. After all, staff need to analyze those amendments, right? All in all, it was a display of good political tactics, and poor governance.

In the aftermath, many residents have asked for my latest thoughts on MMHI. I sometimes ask which version of MMHI, and I always tell them it’ll take a couple of minutes, because despite the hot takes on social media, and the increasingly polarized positions, it’s actually complex.

We need to compare MMHI to what we have, not just to an ideal and likely distant future. And as I’ve noted before, the housing status quo is currently a disaster for far too many resident of Victoria: 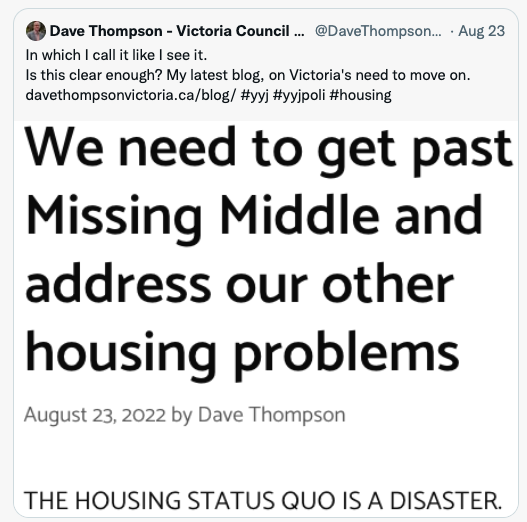 As I have said before, MMHI is not perfect. It’s got a lot of compromises and complexity, and with ongoing amendments it’s a bit of a moving target. It likely would not result in much housing being built according to third-party financial analysis. It’s an improvement over the status quo but it might have been politically wiser to bring forward a proposal that was simpler and clearer. I don’t blame City staff, who did a great job on policy analysis and incorporated a wide range of inputs from various perspectives. However, Council could have done a better job on the political side.

Council could have directed staff to focus MMHI on the original challenge: that the majority of Victoria’s residential land is still, in 2022, zoned exclusively for single detached houses (a new SDH generally costs over $2 million). Other policy objectives could have been given more attention and broader application in their own designated policy proposals; for example, better urban forest protection and accessibility requirements should apply to a wider range of housing types, and not just missing middle.

So what happens when an old house reaches the end of is life and gets torn down?

Victoria’s zoning bylaw in most areas requires that only an SDH can replace it. As a result, what we have built for the last few decades is mainly SDHs and condo / apartment buildings; the middle-sized homes (multiplex and townhouses) have been relatively rare – the “missing middle.”

If, instead of an SDH, you want to build a duplex, houseplex or townhouses then you first have to try to get the land re-zoned. Re-zoning is a difficult, time-consuming, and costly process that is uncertain to succeed. The requirement for re-zoning gives preferential treatment to property developers over homeowners and builders, because navigating the re-zoning process is something that developers are very familiar with.

This is entirely backwards, and it needs to change.

Another bit of context here is that the city has tight restrictions on secondary suites and garden suites (number, size, etc), as well as house conversions that could provide multiple units in an existing house. Some older, larger houses have been converted to multi-family, and they can be quite attractive as well as functional, e.g. the four-plex shown below. But City regulation restricts conversions to houses older than 1984, and larger houses – as well as containing a myriad of other restrictions.

Allowing at least two or three suites per house, and more flexibility for house conversions and additions, would make preserving existing houses more financially viable. This in turn would reduce the waste and large GHG emissions from demolition and construction. I would like to see the City make it much easier to provide more homes by renovating existing houses. 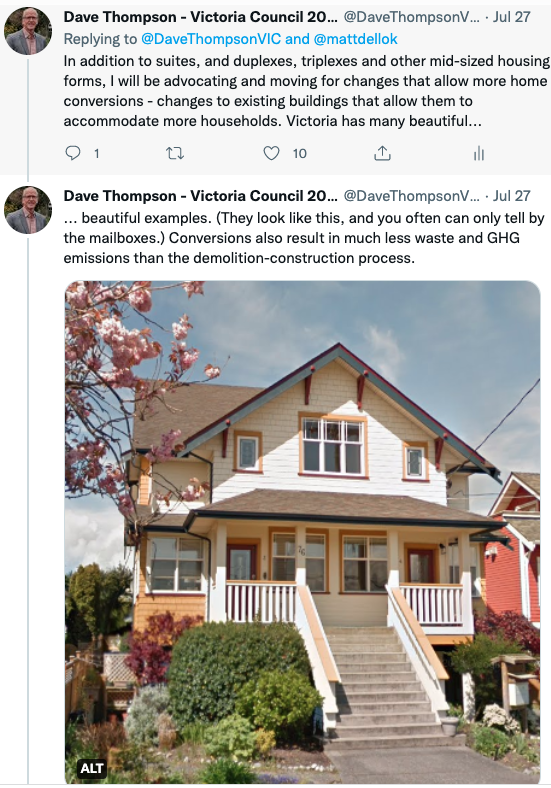 To conclude, it’s actually not just black-and-white: simplistic takes on MMHI mainly stoke division and serve political purposes without helping us move forward. There is important context, and the status quo is a disaster created by outdated policies that need changing. We need more housing of all types, and for all types of people. MMHI is one small part of the policy mix that needs to change.

There, that was just a couple of minutes, right?