I ran for Council in order to address important issues, and this election gave me an excellent opportunity to discuss issues and potential solutions with Victorians.

The housing crisis is a key and urgent issue area for Victoria residents and employers – including the shortage of attainable homes, low vacancy rates, and high and rising rents. After being sworn in, I will be bringing motions to Council to address this area, among others.

Some of the actions will take time, but some initial steps can be taken in the short term. I plan to bring motions to advance the following initial actions toward housing attainability and affordability. Note that these are just initial actions – a start, not an end. More will be coming.

Victoria’s House Conversion Regulations enabled the preservation of many older houses while providing more units of housing (see image of 4-plex below). The regulations enabled this with less of the waste and greenhouse gas emissions that come from demolition of houses and new construction. 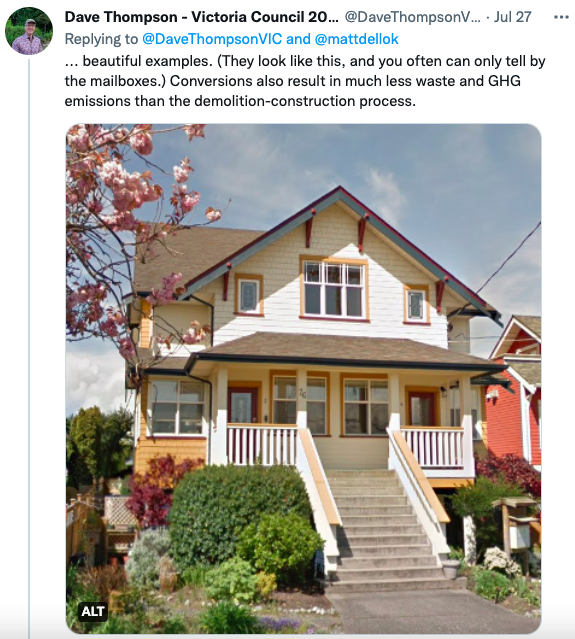 I plan to make a motion that will relax some of the many restrictions in the Regulations (e.g. the pre-1984 rule). This will make it easier to add many units to a wider range of houses in Victoria, at zero cost to governments, and with less environmental impact.

Non-profit housing providers know what is needed to accelerate the provision of affordable housing. I plan to make a motion for Council to endorse the Calls to Action of the fourteen non-profit housing providers that make up the Vancouver Island Housing Leadership Network (VIHLN), and to ask staff to report on how to rapidly implement the outstanding Calls to Action.

We also need to ensure that the Rapid Deployment of Affordable Housing Initiative will actually deliver significant acceleration of affordable housing. In coming weeks and months, I hope to hear from staff and from interested parties as to whether it will need adjustments.

The provincial government has been indicating for more than a year that it will allow more homes to be built on a single lot. The premier-designate announced his intention that triplexes will be allowed on all lots. While campaigning I noticed that among people who strongly opposed the Missing Middle Housing Initiative, the vast majority support duplexes and triplexes.

We don’t know when the province will act, or what the legislation will look like, or its impact on municipal powers. However, short term action is needed to allow more housing. I plan to make a motion for a bylaw amendment to allow triplexes in all traditional residential areas that currently only allow single detached houses, and also a motion asking staff to propose amendments to living space restrictions in order to allow for more large, family-sized units in duplexes and triplexes.

I also plan to make a motion to allow multiple suites on lots currently zoned for single detached houses, to replace the current limit of one suite.

Parking requirements raise the cost of homes, often by tens of thousands of dollars. They can make it uneconomical to even proceed to build homes. They also take up space that could be green space, trees and gardens. The City currently requires most homes to have parking spaces, even if the occupant has no car.

Owners should be allowed to make their own decisions about whether to have parking spaces. Eliminating parking minimum requirements doesn’t mean there will be no parking. It means that owners will be able to determine themselves how much parking to provide. Some parking is still often desired by owners or required to attract buyers.

Cities across North America are reducing or eliminating parking requirements (see image below).  I plan to bring a motion to eliminate parking minimums for the majority of the City. 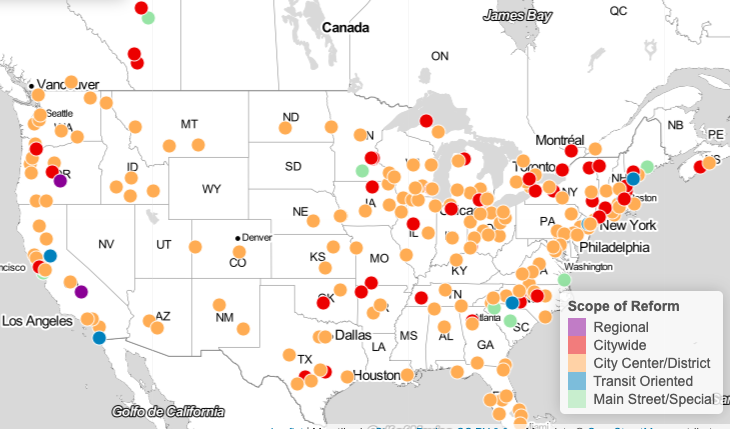 There is also a risk that some developers will continue to over-provide parking, paving over excessive amounts of greenspace for automobile storage. I plan to bring a motion asking staff to report on where parking maximums can be successfully implemented, possibly alongside transportation demand management (TDM) measures.

City Council regulates short term rentals, and banned year-round short-term rentals of entire suites, but the provincial Local Government Act automatically “grandfathered” those suites and the whole building where any suite was used in that manner, i.e. made them “legally non-conforming.”

I plan to make a motion for Council to advocate, with other municipalities, to the provincial government to create an amendment to the Local Government Act that would phase out that grandfathering, potentially returning hundreds of suites to the rental market to serve Victoria residents.

I want to underscore two things about the above listed items:

I will be bringing forward more motions – on these topics and others.